Mike Rowe, widely-known from the hit TV show “Dirty Jobs” and a series of Ford commercials, appeared on The Glenn Beck Program Wednesday to discuss his efforts with the mikeroweWORKS Foundation in challenging “the absurd belief that a four-year degree is the only path to success.”

“We’re lending money we don’t have, to kids who will never be able to pay it back, for jobs that no longer exist,” he explained, echoing what he told TheBlaze TV’s Andrew Wilkow earlier this month. “That’s crazy, right? That’s what we’ve been doing for the last forty years.”

Rowe’s motivation for the work largely began with what he described as “the worst advice in the history of the world” – a poster he saw in high school challenging students to “work smart, not hard.”  The picture of the person working “smart” was holding a diploma, and the person working “hard” looked miserable performing some form of manual labor.

“Today, skilled trades are in demand. In fact, there are 3 million jobs out there that companies are having a hard time filling. So we thought that skilled trades could do with a PR campaign,” he said with a smile. “So we took the same idea, went ahead and vandalized it. Work smart AND hard.’”

For the rest of the article: Source

Well, according to the NY Times, most Americans are accumulating debt faster than they are accumulating savings for retirement. Remind you of anything in the news recently…. say, the National Debt?

Most Americans accumulating debt faster than they’re saving for retirement

By Michael A. Fletcher, Published: October 23

A majority of Americans with 401(k)-type savings accounts are accumulating debt faster than they are setting aside money for retirement, further undermining the nation’s troubled system for old-age saving, a new report has found.

Three in five workers with defined contribution accounts are “debt savers,” according to the report released Thursday, meaning their increasing mortgages, credit card balances and installment loans are outpacing the amount of money they are able to save for retirement.

For more of the article: http://www.washingtonpost.com/business/economy/many-americans-accumulating-debt-faster-than-theyre-saving-for-retirement/2013/10/23/b7a9c85e-3b3e-11e3-b6a9-da62c264f40e_print.html

“We don’t even have enough funding to buy bullets, and the DoD is pushing to spend $8 million on covers that look like women’s hats!” one senior Marine source fumed to The Post. “The Marines deserve better. It makes them look ridiculous.”

Jon, you know I love you man, but you’ve GOT to take a chill pill. Yes, we’ve been lied to by Congress and THE BIG BOSS himself. But this is nothing new, and you can’t really impact their decisions or behavior with your rants on ObamaCare, Immigration, Global Warming (aka “Climate Change”), the state of Education in the United States, or our national debt.

May I recommend that you take advice from the Canine Community? 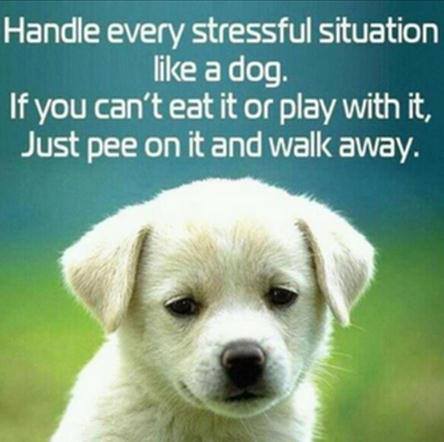 I’ve been amused… and disappointed… by the ignoramuses discovered by Jay Leno during his “Jay Walking” (http://www.nbc.com/the-tonight-show/video/categories/jaywalking/20187/) segments.

Here’s new evidence that, at least in California, our society’s collective wisdom is starting to clog up the drains on the gene pool: